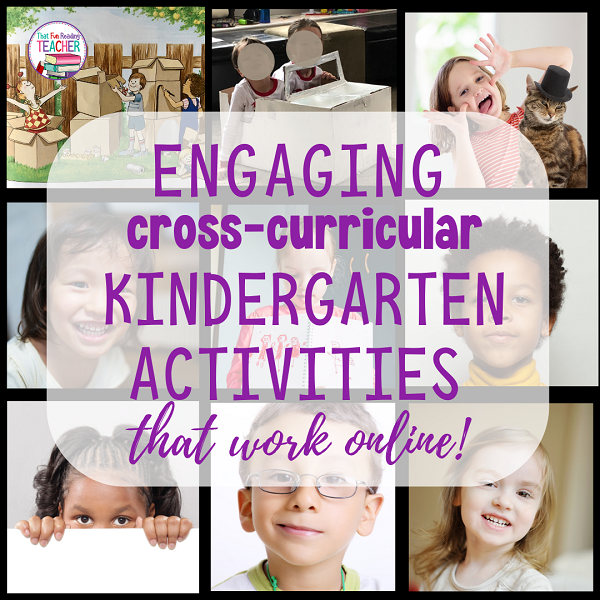 Looking for engaging, cross-curricular kindergarten activities that work online? Here are three learning experiences that were a hit in our class!

After organizing our online class into smaller groups, we started weekly Show and Tell time.  This was the traditional showing of a toy and resulting discussion. Students’ attention, however, was often on telling their own story (loosely related to the item being shown) or on the item they were waiting to show themselves.
We made the first shift to Show and Share with the request to bring a picture online that they drew or a photo of their family. It was a nice way to learn a bit more about our students and a good opportunity for them to speak about what they knew. Their classmates listened with interest.
The directed sessions tied into things we were focused on in a given week. We requested that our students find something focus-based for Friday’s Show and Share in Monday morning Week-at-a-glance postings. Here are some examples: two things that rhyme, something that starts with the same letter as your name, two different things that are the same shape, something with numbers on it, etc. This gave students a scavenger hunt they could do that allowed their parents some peace! Kindergarten students love feeling like they get to be the teacher for a few minutes a week, too. Win-win! 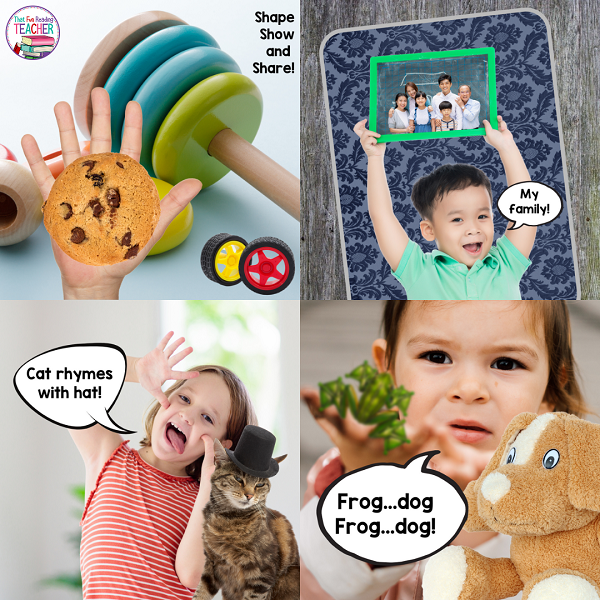 I read Jillian Jiggs to the Rescue to our class (an awesome storybook lesson)! We had been focusing on rhyming, and these stories lent themselves well to that. Phoebe Gilman’s illustrations offer so much for their audience to lose themselves in, and the reader to extract meaning from. Our students were enthralled with the monsters that Jillian and her friends made out of the cardboard boxes. Boxes were constantly being delivered into most of their homes because of the pandemic! 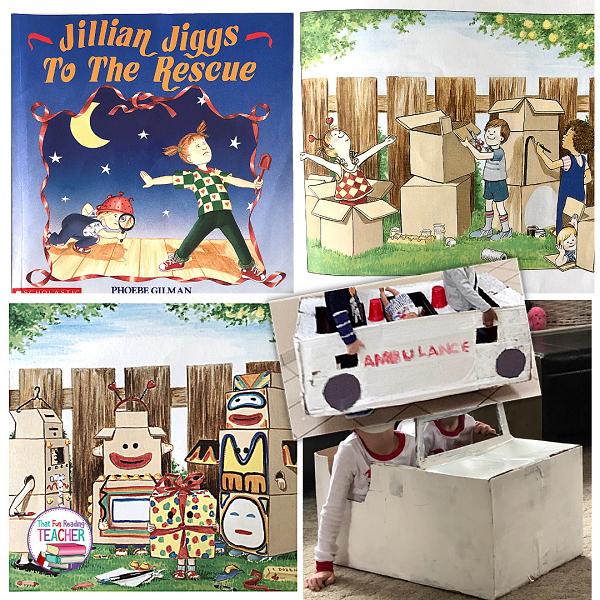 With Jillian Jiggs’ monsters fresh in their minds, and pictures of the ambulance my class made last year online as models, our students were excited to create box projects. We talked about materials and what they would have to ask permission for and get help with. They shared many creative ideas. Some stuck with the monster theme while others branched off into robots. Vehicles were the most popular!
I posted the results of our discussion in our online classroom as an asynchronous option and invited sharing of pictures. Over the next few days, many pictures showed up and classmates (through their parents) left rave reviews in the comments for each other. It was wonderful how they supported each other, and it gave them more to discuss during social time.

Why we did it:

Virtual learning environments by nature do not foster social-emotional growth and independence in our youngest students. Those short yet powerful moments when they would normally speak for and amongst themselves are lost in online learning, so it’s important to schedule them in! We want ‘Computer school’ to be as much like going to school in person as possible – with as many of the engaging, cross-curricular conversations and activities that make kindergarten feel like kindergarten!
Before 2020, kindergarten students engaged in conversation during play, at snack time, outside, during transitions and before and after school. For the first time in history, adult – child ratios in kindergarten are nearing 1:1 or 1:2 in some areas with parents taking on even more responsibility in their already full lives. Colleagues who also teach little ones have commented on the puppet phenomenon that has been a side effect of online teaching – students who look to their parents to tell them what to say, when they are capable of saying it themselves.

How we set it up:

We had Meet-the-Teachers Meets early in the school year, and introduced the idea within those family Meets, reinforcing what we had discussed before they started. We reviewed some ideas for conversation starters, and then it began. 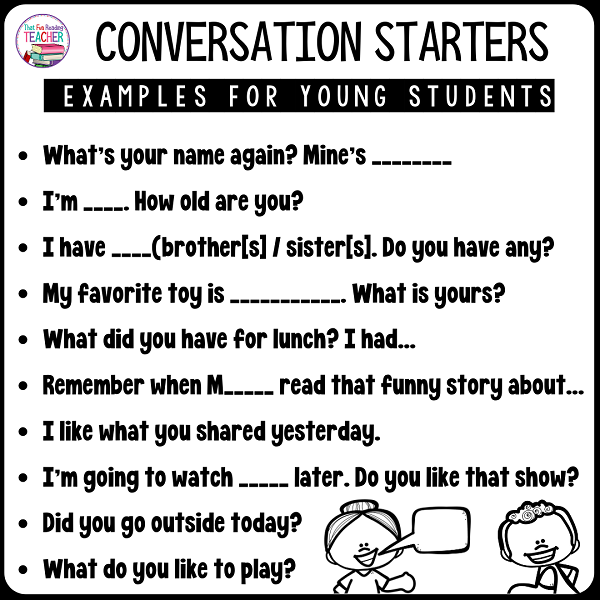 At the beginning, it was all about ‘What did you have for lunch?’. A few well-meaning moms were right there to jump in and get them talking. Once truly left to themselves, and sitting with a bit of awkward silence, they started to talk to each other. (I admit I sent my cat past the screen a couple of times for some comic relief once or twice in the beginning – picture a gift appearing in a toned-down Hungers Games.)

Within a couple of days, they were arriving early to visit each other and the five minutes flew by with engaging conversations about pets, toys, activities and more. They had become friends. 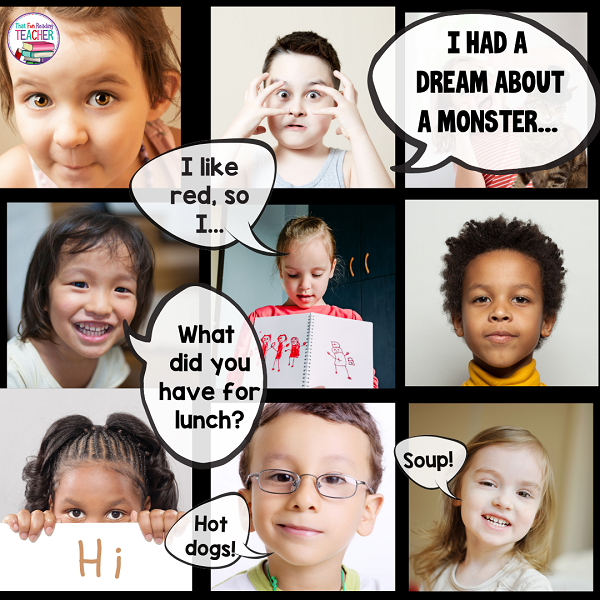 We had four schools worth of kids in our virtual class, in multiple groupings. Moms from two of the schools organized small ‘bubble’ groupings within their own home schools to meet at the park most days so their kids could also be in-person friends, too.
We were in the process of creating a virtual by interest play group schedule for asynchronous time when our board switched to the hybrid model mid-October. We had to say goodbye to our virtual class.

Anticipating that we would have our class all year, I did create these assessments with the intention of using my iPad through the screen, on printed recording sheets. I had too many split screen issues trying other things! They are Google Slides compatible, and I dreamed them up before COVID, as a way to have a portable (i.e. use on tablet in the kindergarten yard), kid-friendly (short sections with fun visuals), mess-free (vs. my letter tiles, shape manipulatives etc.) time saver.
I bundled them with The Complete Personal Letter Sounds Bundle   to create this: 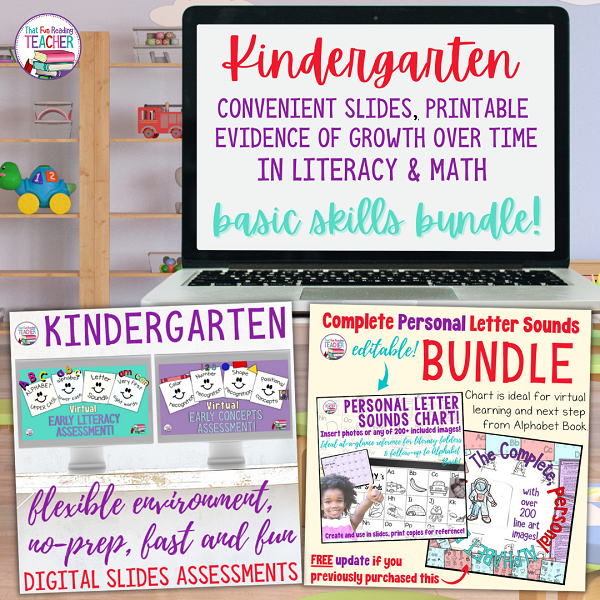 Have you noticed the puppet phenomenon? How do you address it?
Best wishes to all of you and your loved ones as we climb out of this! 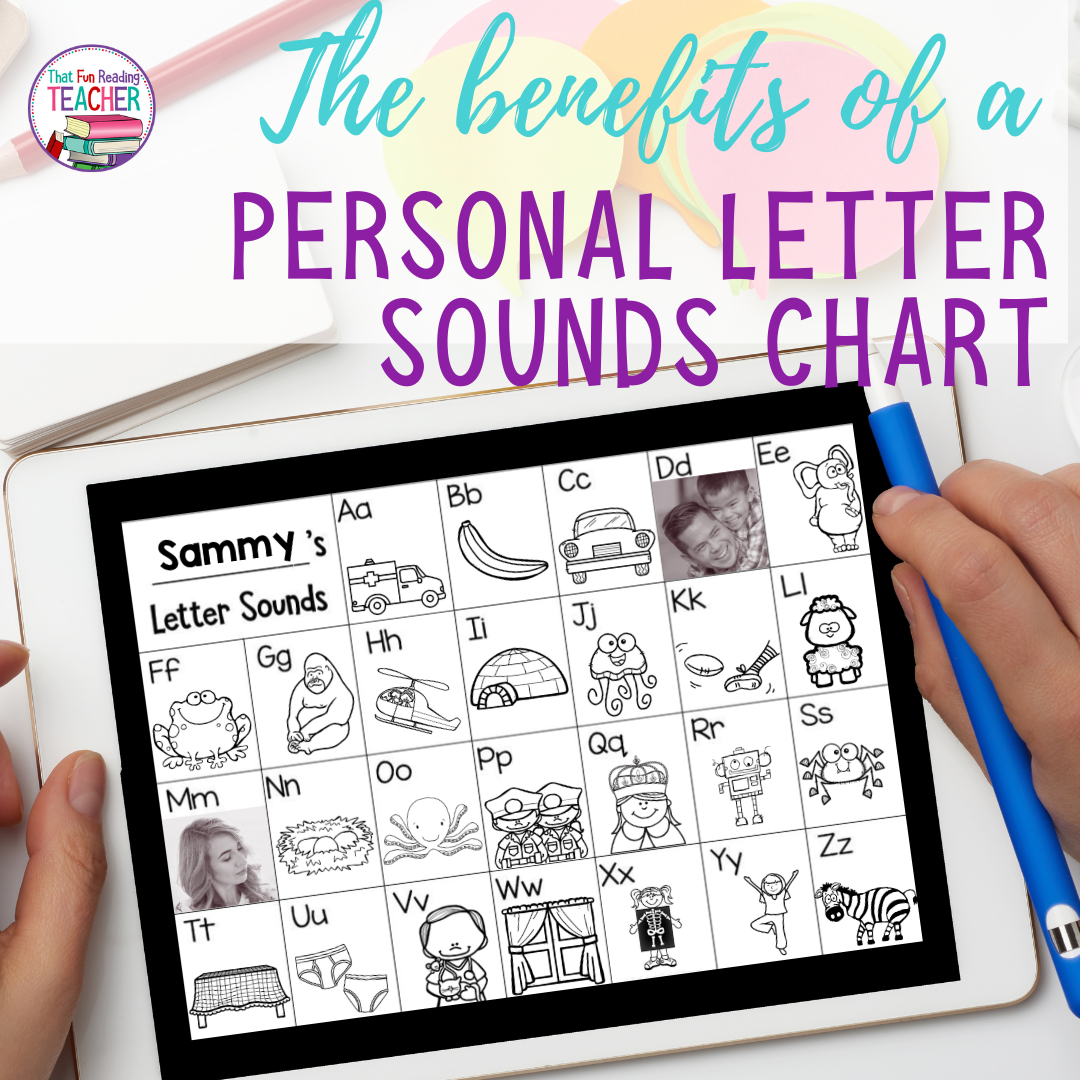 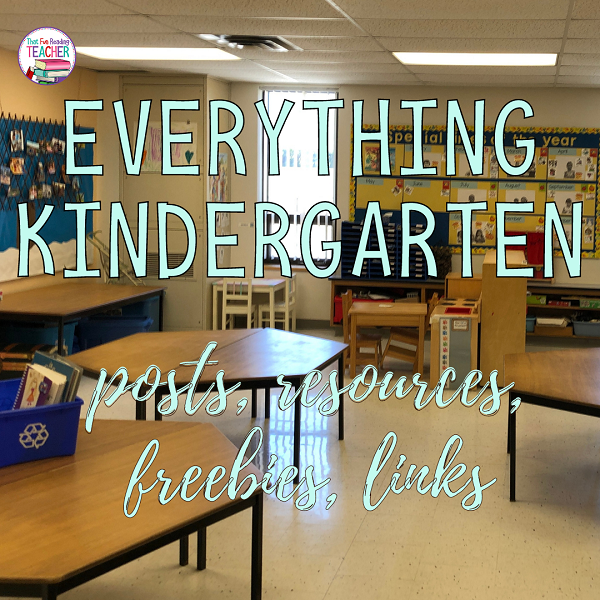 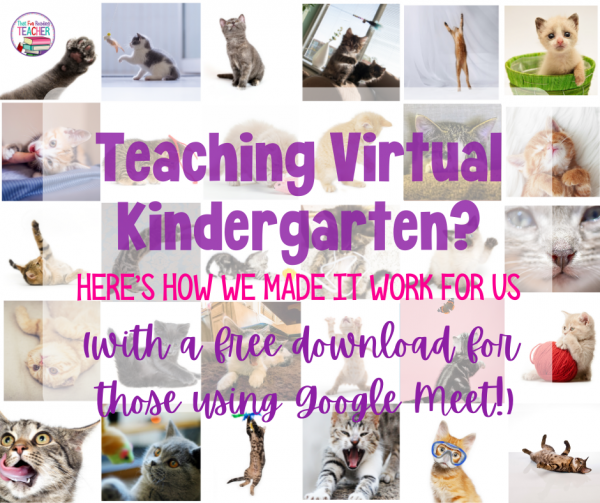 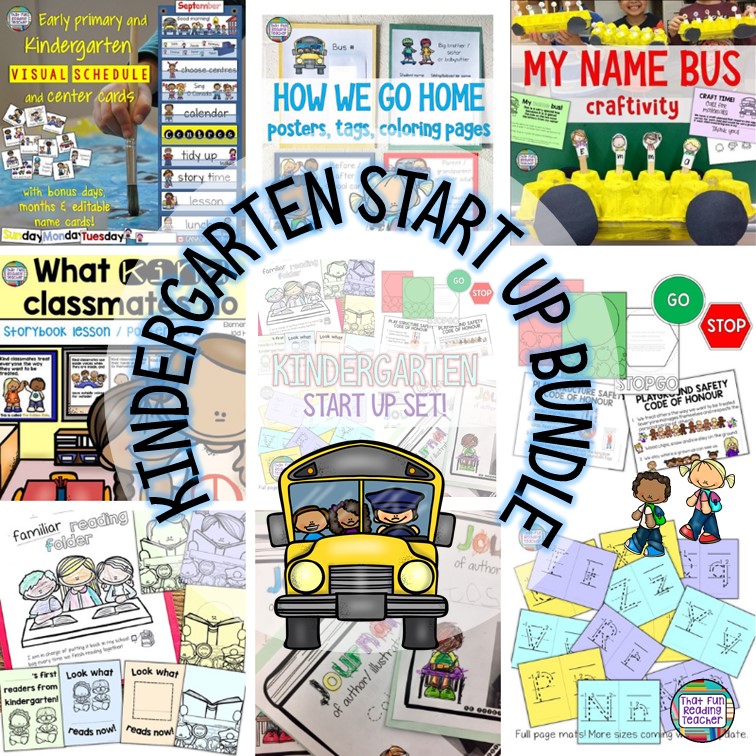 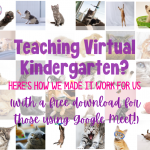 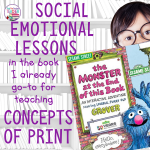 Social emotional lessons in my go-to book for teaching Concepts of Print. 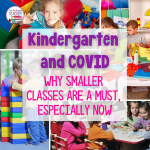 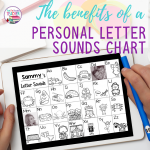 The benefits of a personal letter sound chart

This site uses Akismet to reduce spam. Learn how your comment data is processed. 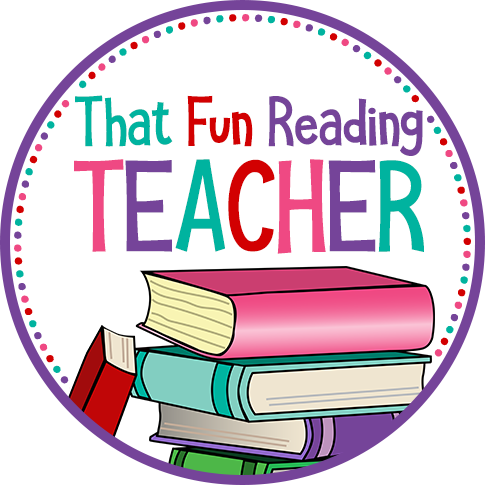 Canadian mom and literacy teacher sharing great content from years of fabulous on-the-job training, and the best of what I find on the web. Background in teaching kindergarten and primary grades, Reading Recovery and special education 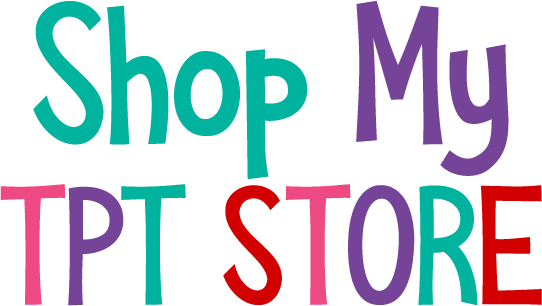 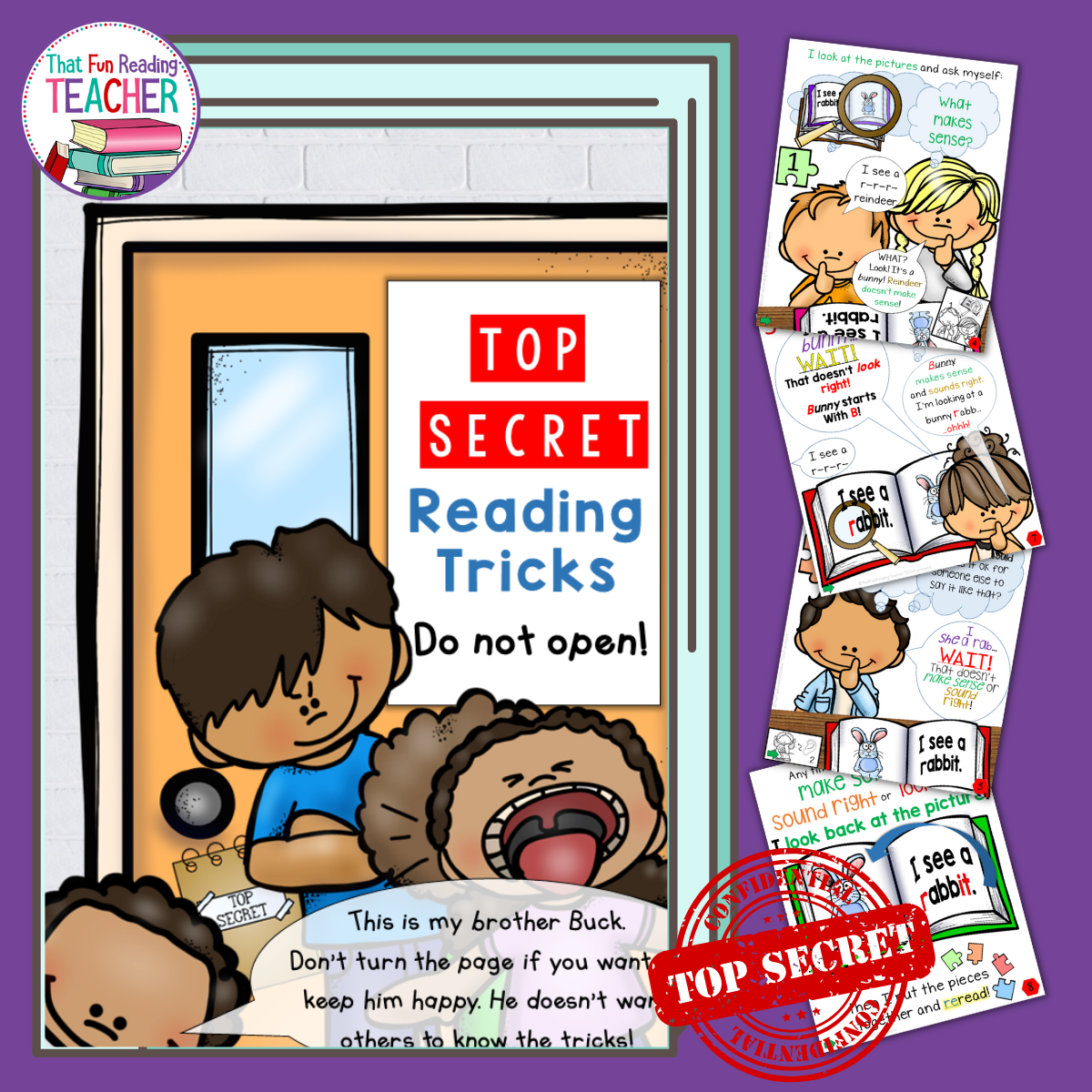 The Dealing with Feelings Series 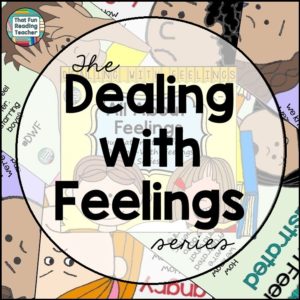 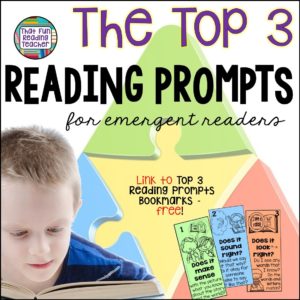 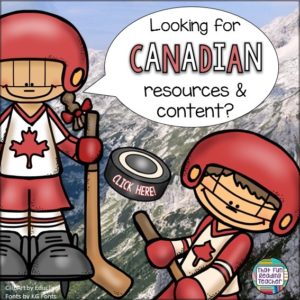 I love hanging out with our kindies! Here’s what

It’s like running into a student outside of scho

I don’t know about you, my friends, but I’m lo

Groundhog day is just two days away! This is a gre

Today took me back. I don't remember a single day

Did you start back today? School 'starts' feel lik

We use cookies on our website to give you the most relevant experience by remembering your preferences and repeat visits. By clicking “Accept All”, you consent to the use of ALL the cookies. However, you may visit "Cookie Settings" to provide a controlled consent.View Terms and Conditions
Cookie SettingsAccept All
Manage consent

This website uses cookies to improve your experience while you navigate through the website. Out of these, the cookies that are categorized as necessary are stored on your browser as they are essential for the working of basic functionalities of the website. We also use third-party cookies that help us analyze and understand how you use this website. These cookies will be stored in your browser only with your consent. You also have the option to opt-out of these cookies. But opting out of some of these cookies may affect your browsing experience.
Necessary Always Enabled
Necessary cookies are absolutely essential for the website to function properly. These cookies ensure basic functionalities and security features of the website, anonymously.
Functional
Functional cookies help to perform certain functionalities like sharing the content of the website on social media platforms, collect feedbacks, and other third-party features.
Performance
Performance cookies are used to understand and analyze the key performance indexes of the website which helps in delivering a better user experience for the visitors.
Analytics
Analytical cookies are used to understand how visitors interact with the website. These cookies help provide information on metrics the number of visitors, bounce rate, traffic source, etc.
Advertisement
Advertisement cookies are used to provide visitors with relevant ads and marketing campaigns. These cookies track visitors across websites and collect information to provide customized ads.
Others
Other uncategorized cookies are those that are being analyzed and have not been classified into a category as yet.
SAVE & ACCEPT